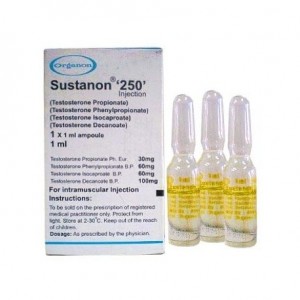 SUSTANON is a mixture of 4 Testosterones: 60-mg Testosterone Phenylpropionate 30-mg Testosterone Propionate 60-mg Testosterone Isocaporate 100-mg Testosterone Decanoate. This is a well structured product that acts as a well timed time-released high anabolic/high androgenic testosterone. In fact, due to Testosterone Propionate, this product becomes active after one day, but through the series of the other 3 testosterones, remains active for 3 weeks. This mixture had a reported better over all effect milligram for milligram than any other testosterone alone. Users experienced a rapid increase in strength and an even increase in solid mass during administration. Sustanon aromatized less and caused less water retention when compared to other single testosterones and much less than Omnadren. Liver toxicity was low (Except in ridiculous dosages) as the liver metabolizes testosterone very efficiently. Like all testosterones, Sustanon provided improved muscle pumps, better post-training recuperation, and an elevation in aggressiveness toward training. Sustanon significantly suppressed the HPTA so natural testosterone production was significantly decreased as well. For this reason, HCG and Clomid were considered mandatory after 4-6 weeks of continuous use and after the discontinuance of the drug. Males normally utilized dosages of 250-1000mg weekly, but some used higher dosages. As a rule, excellent results were realized with a dosage of 250-500mg every 7-10 days. Most novices and women noted that they felt that they should not use testosterone. Novices…because it was not necessary and it will limit later potential progress. Women should not use them (but a few reported doing so) due to virilizing effects. Some woman polled just could not leave testosterones alone. PROSCAR (FINASTERIDE, A DHT BLOCKER) was considered mandatory for co-administration and TESTOSTERONE PROPIONATE 50mg 1 time weekly was noted to cause less virilizing side effects
ITEM OUT OF STOCK
Add to Basket
Close
Move slider to zoom
- + Zoom
Product name
View your basket and checkout View your basket and checkout
Close
OUT OF STOCK
Sorry, this product is not available for the quantity you selected.