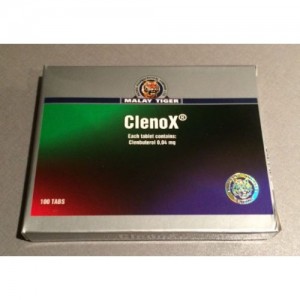 ClenoX ® is a very effective fat burner, bodybuilders often use it in definition period and in pre-competition training. Its effects are very similar to the popular substance ephedrine, but it has a slightly stronger and longer lasting effects. Clenbuterol causes a slight rise in body temperature, heart rate, and in particular, accelerates fat loss.

In medicine, it is used to treat bronchial asthma, which is why in sports sphere it is used as breathing assistant. Users often report that they are able to withstand the cardio workout for much longer.

CHARACTERISTICS
Clenbuterol is not an anabolic steroid, but belongs to a group of substances and drugs known as sympathomimetics. The substances of this group affect sympathetic part of the nervous system in many ways, most often by stimulating adrenoceptor. These receptors are found in a number of different tissues throughout the body. The result of the stimulation is expressed as a variety of effects depending on the location of the receptor. The effects include increased blood pressure, increased heart rate, respiratory expansion, and a general increase in performance and energy consumption. Other effects include euphoria, sedation of the hunger centre in the midbrain with a subsequent decrease of hunger and others.

Clenbuterol is specifically a selective beta-2 agonist / antagonistaa bronchodilator. That is, it stimulates the beta-2 receptors. The reason why it is useful in the treatment of asthma, is because in the activation of beta-2 receptors in certain tissues (in particular in the cells lining the respiratory tube), it allows bronchial dilation (enlargement of the airways) in the lungs. Effect on beta-2 receptors is also related to fat burning. And through the activation of these receptors located on the surface of fat cells, clenbuterol can directly activate and start the fat metabolism. Beta-2 receptors located on the fat cells have a primary role in the influence of fat metabolism, more likely than other alpha or beta receptors, which also contain the fat cells.

In any case, the selective stimulation of the beta-2 receptor is responsible for the breakdown of fats. Studies have shown that in everyday use over time, the response of receptors to the effects of clenbuterol is reduced. The result in continuously weakened fat burning effects. During these studies, it was also found that the use of ketotifen fumarate (allergy drug) actively increases the sensitivity of the beta-2 receptors. Loss of fat burning effects without the use of ketotifen usually occurs after the second or third week of use. In this case, at least a two-week break is necessary to prelaunch receptors.

The side effects of clenbuterol are very similar to all the other substances from the group of stimulants (such as caffeine, albuterol, ephedrine, epinephrine, norepinephrine, and so on). The most common side effects associated with the whole group of stimulants are: tremor (shaking hands), insomnia, sweating, headache, increased blood pressure, and feeling sick. Side effects are quite common and likely to occur in each individual taking clenbuterol.