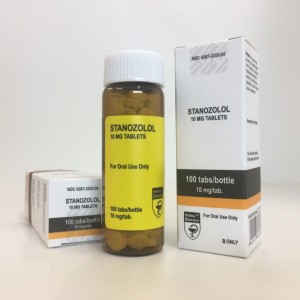 Price: £20.00
<p>
Stanozolol, which is manufactured under the brand and trade name Winstrol is available as both an injectable and oral anabolic steroid. It is commonly seen as the third most popular anabolic steroid used among athletes and bodybuilders alike. Dianabol takes the number one spot, while Deca-Durabolin takes the second spot. The majority of people will have heard of Winstrol from reported allegations that Ben Johnson, a Canadian Olympic sprinter tested positive for it during the 1988 Seoul Summer Olympic Games. However, its origins stretch back to 1959 when details of it were released to the scientific and medical community. Stanozolol was first marketed on the prescription drug market by winthrop laboratories. In 1961, the USA based Sterling purchased the patent for the American market, giving it the brand name of Winstrol.</p>
<p>
Winstrol gained approval for use in treating a multitude of medical issues after being released as a prescription medication. These ranged from treating muscle wasting diseases, stunted growth in children, treating burns victims and for treating osteoporosis. However, when used for treating anemia it proved not to be as successful. Its mechanism of action works amazingly well in a handful of ways. Primarily, it binds with androgen receptors instead of non receptor-mediated activity, which is the primary operation for other anabolic steroids including Anadrol and Dianabol. Winstrol also possesses a reduced affinity when it comes becoming bound with glucocorticoid binding sites. It also has a lower degree of progestogenic activity while offering activities independent of the androgen receptor.</p>