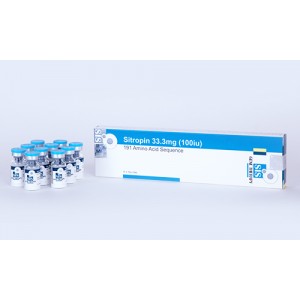 Vexagen Somatropin 10iu is a sterile, non-pyrogenic, white, lyophilized powder intended for subcutaneous or intramuscular injection after reconstitution with Sterile Water for Injection,

The reconstituted solution has a pH of 6.5 to 8.5. Vexagen Somatropin 10iu is available in 10iu vial composition. somatropin is a form of human growth hormone. Human growth hormone is important in the body for the growth of bones and muscles.

somatropin is also used to prevent severe weight loss in people with AIDS, or to treat short bowel syndrome and may also be used for other purposes not listed in this medication guide.

somatropin is used to treat growth failure in children and adults who lack natural growth hormone, and in those with chronic kidney failure, Noonan syndrome, Turner syndrome, short stature at birth with no catch-up growth, and other causes.
- 1 +
Add to Basket
Close
Move slider to zoom
- + Zoom
Product name
View your basket and checkout View your basket and checkout
Close
OUT OF STOCK
Sorry, this product is not available for the quantity you selected.