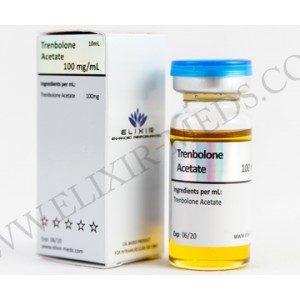 The Acetate ester attached to this hormone is very fast acting. Therefore, bodybuilders choosing to use this substance often find that daily injections are best for keeping blood and hormonal levels as consistent as possible.

Simply put, Trenbolone Acetate is the strongest injectable steroid in use by bodybuilders today. 'Tren', as it is often called, is both highly androgenic and anabolic. It is chemically unable to aromatize, and therefore produces no estrogen buildup. This, along with its high androgenic properties, allows the drug to produce a very hard, vascular, and grainy-looking muscle.

Trenbolone first got its reputation when it was used in the legendary steroid, Parabolan. Users of this drug often noted dramatic results that were nothing short of amazing, and after it was discontinued, the remembered effects of the substance gave it cult-like status and the market was flooded with counterfeit Parabolan amps by those looking to profit off the extreme popularity and fan base that this steriods incredible results had sparked.

Trenbolone Acetate was also used in cattle implant pellets, where the substance was used to increase the lean mass of the cattle, while reducing the fat on the animals. Kits became widely available on the internet allowing bodybuilders to convert these pellets into injectable solution. 'Fina', as this homebrew oil was often called, quickly became a favorite of steroid users, like its relative, Parabolan, had done many years before.

Users of Trenbolone Acetate often report amazing gains in both strength and quality muscle mass, while the fat and water seems to "melt" off. To give one an idea of just how powerful this hormone is as a muscle builder, please note that the hormone Testosterone has an anabolic rating of 100, while Trenbolone has a rating of 500. The drug is also a powerful fat burning aid, and many bodybuilders actually claim that the body will still drop bodyfat very quickly, even in the midst of poor dieting habits.