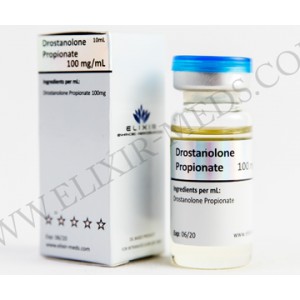 Masteron is a powerful anabolic/androgenic steroid derived from DHT that was designed to fight certain forms of breast cancer. It is used by bodybuilders as a bulking and cutting agent, as well as an ancillary drug to combat estrogenic side effects like water-retention. Its toxicity to the liver is very low, although side effects such as acne, hair loss and prostrate enlargement are common.

Masteron is an injectable preparation containing the steroid drostanolone propionate. Drostanolone is a derivative of dihydrotestosterone, most specifically 2alpha-methyldihydrotestosterone. As a result, the structure of this steroid is that of a moderate anabolic/potent androgen which does not aromatize to estrogen. Water retention and gynecomastia therefore do not come into play with this drug. Masteron may in fact exhibit anti-estrogenic activity in the body, competing with other substrates for binding to aromatase. This would reduce the conversion rate of other steroids, Masteron acting in the same way as the oral steroid Proviron.

Bodybuilders have a strong like for non-aromatizing androgens, and find Masteron very useful in a cutting phase. It is generally used for a number of weeks prior to a competition, in an effort to bring out an improved look of density and hardness to the muscles. As long as body fat percentage is low enough, Masteron should work very well. Provided everything fits as if should, the user can achieve that “ripped” look so popular to professional bodybuilding. The androgenic effect can also be crucial during this period, a time when caloric intake is drastically lowered. The user is provided added “kick” or “drive” to push through the grueling training sessions leading up to the show.