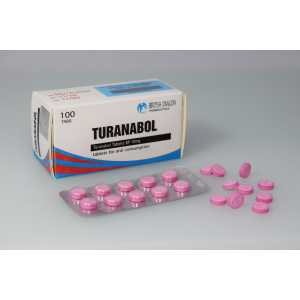 
Turanabol has quite the history. The Germans used the oral steroid as part of the training routine for Olympic athletes from 1966 to 1990 were given oral steroids, including Turanabol, to improve performance. The practice was not revealed until the German Democratic Republic collapsed.

If we step back from the sheer negativity that surrounds using steroids for improved performance and muscle gains, we can see why Turanabol continues to be a sought after steroid. The side effects are minimal, though there is potential for liver-based side effects. It is best to cycle Turanabol in 8-week stretches followed by liver support to prevent problems. The steroid is not converted to estrogen and often the user feels no side effects whatsoever, but the progress and performance gains are slow.

Oral Turanabol is not going to be as successful and effective as an injected steroid, but the lack of side effects is enough to push the use. Turanabol can be used as a primary steroid or as a bridge between cycles of other, stronger steroids to prevent loss of muscle mass and strength.

Now, if we step back into the real world we want to tell dieters that steroids are not a safe choice in any case. They can cause liver damage and other side effects if not cycled properly. It takes a lot of information and knowledge about the chemistry of steroids to understand what supplements to use for cycling and protecting the body from the negative effects of steroids.