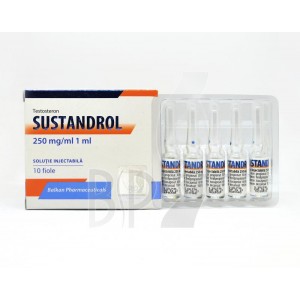 When it comes to Sustanon's original intent, the idea was to create a testosterone compound comprised of varying sized esters that would allow for instant testosterone benefits that would be long lasting. Of course, this hope would prove to be successful; in-fact, a TRT patient could actually remedy his low testosterone condition with only one injection of Sustanon 250 every three to four weeks. Even so, due to a mixture of small and large esters, a problem was later discovered; while low testosterone would be remedied, total testosterone levels would rise and fall beyond appropriate or satisfactory means. For this reason, if levels are to be maintained at a more stable level, one injection every teen to fourteen days is probably more efficient, and for this reason, many U.S. physicians often opt for large single ester testosterone compounds like Testosterone Cypionate.

While the original intent of Sustanon was for TRT, this can be an excellent choice for performance enhancing athletes; after all, Sustanon 250 is merely testosterone. Even so, due to the mixture of four varying esters, if levels are to remain not only stable but also peaked at all times, despite large esters being a part of the compound every other day injections are normally recommended. You might be able to get by with three injections per week, but an every other day schedule will prove far more efficient. With all of this in mind, we want to look at Sustanon , what it is precisely, what it has to offer, the side effects associated, and of course, what you can do about them in-order to achieve successful supplementation.

You are advised to consult your medical consultations before use of the product.