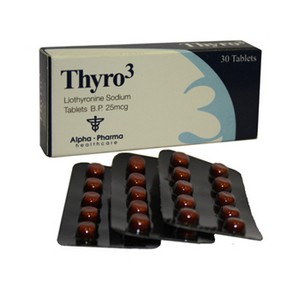 Cytomel is the commonly associated brand name for the synthetic thyroid hormone Liothyronine Sodium. This is a perfect replica of the naturally produced thyroid hormone triiodothyronine, or what is commonly referred to as the T3 hormone. While synthetic Cytomel has been available since the 1950’s, thyroid hormones including T3 have been used medicinally since the 1890’s. Early thyroid treatment plans were simply pure animal extracts and contained pure forms of the T3 and T4 hormone. Extracted thyroid hormones proved very useful in therapeutic treatment plans, specifically in the treatment of hypothyroidism. This is a condition in which the thyroid simply no longer produces enough thyroid hormones, which can lead to weight gain, loss of energy, hair loss and changes in the appearance and texture of the skin. With the introduction of Cytomel, the synthetic model of the T3 hormone, this has provided a much safer and sanitary hormone for such treatments.

Cytomel is not the only synthetic thyroid hormone available. The T4 hormone, Levothyroxine Sodium is also available found under the trade name Synthroid most commonly. Both T3 and T4 are very similar in nature; however, T3 is considered 4-5 times more powerful than T4. T4, in simple terms, acts as a reserve for T3, which makes the Cytomel version the more powerful of the two popular thyroid hormones. While both are effective in treating hypothyroidism, Cytomel is the preferred thyroid hormone among performance enhancement athletes. Anabolic steroid users commonly use Cytomel in an effort to lose body fat.